[Elinor mentioned only one book she was reading herself through the whole diary. That book is titled,  Jane Cable, published in 1906 and a very popular melodrama novel.  It includes a secret identity of an orphan (Jane Cable) raised as if the child of a rich railroad magnate.  There is an evil lawyer (who ends up in jail) and a clerk who know the secret and blackmail the wife who arranged the ruse, after the girl becomes the fiancé of  the lawyer’s naïve son, Graydon.  The truth comes out and the girl breaks off the engagement, then follows him into war as a red cross nurse, still refusing the marriage.  But in the end this Graydon and Jane are married at last.

Elinor’s writing is at times quite dramatic, possibly mimicking this popular type of book drama.  Here are 3 examples of the style, which is short lived in the diary as a whole.   “To night the sleet and snow pelt the windows with such terrific force that it seems almost deafening, while only yesterday morning as I dressed before the open west window I could see the woods nearby and hear the birds twitering and larks singing, the sun was shining warm and bright and all the out door world seemed to have awakened to the call of Spring, but today a cold March wind with sleet and snow causes the earth to groan and shudder.  I’m wondering what the poor little birdies will do to keep warm, for I have most all day beside the fire….The sun has shone all day and everything glitters and sparkles, the branches of the trees, the weeds and bushes look as though they were full of stars.  Tonight we have a pale moon, throw- out a flood of shimmering light, making a picture to behold….it’s been just beautiful out of doors today the birds all singing for joy and the frogs all croaking in one big chorus untill it’s almost deafening as one stops to listen.  The wind has blown stiff from the south making it tedious for one to walk, the crow have sailed about calling so loud that the pariots have been dreadfully un-easy flapping their wings & calling”

Her relationship with Nellie is sometimes contentious such as when they try to do sewing together on one machine (“she tryed to help me by treadlying the machine”)  “my nerves are all jumping about like lunatics & I’m ashamed of myself I’ve been so impatient although we have both laughed about it Knowing I didn’t mean to be so. ” This is the first of a very familiar phrase and concept, that of being too tired to work and therefore “only doing what had to be done”.  Elinor does have hobbies beyond making sewing gifts and writing to others.  She prints pictures though the process is unclear.  “I printed two doz pictyures tonight but spoiled six or eight”   Elinor begins to focus on botany especially flowers from an early age.  It seems to be important to other family members as well.  Pa, Elbert & Fred all went to the woods & brought home pretty bouquets of hepatiticas our first spring flowers,  I have sent a bon bon box, full, by Fred to mail, to Audrey & Geo. to-night. ”

[Tue. Apr. 2. 1912] Page 14:  Tue.2.  Gertie is the same.  Ruby gaining. baby well. George is doing fine  Frank was over to day  Ma received a letter from pa & Audrey. & one from aunt Edith.  Nellie & I have been sewing on her new dress, an old rose poplin & oh how tired we are for she tryed to help me by treadlying the machine & it was trying to us both  This morning we woke to found the ground & everything out of doors covered with snow the sun began to shine about noon the snow is disappearing poor Gertie I’m worried most to death about her wish she would begin to gain, but she so queer when she once gets down does-n’t try to get up and it’s so hard for her and every body.  Well Home doesn’t seem like home any more with part of the children away & pa to & ma has been gone so much & Gertie sick & Fred isn’t a bit well  Oh, Oh, I’ll be glad when I can work & glad when al are well.

Page 15.:  Gertie about the same George gaining.  Received a letter from Miss Julie Kauf. the Hospital cook who has of late been converted to night nurse. jolly girl. ma washed today & I was permitted to hang them up to dry, ma is look-ing more anxious every day about Gertie, but Gertie crys & makes such a fuss, tiring herself completely out when ma says she think she will call a doctor, that ma tells her at last that she wont, something has got to be done soon. Wish pa was here.

[Thurs. Apr. 4. 1912] Thurs.4.  Well mother has wakened me looking more troubled than ever.  she expresses her fears.  I try to reason with Gertie, who makes all sorts of threats if a Doctor comes near her.  Well mother at least desides to send me to a near neighbor to call Dr. Smith. thinking perhaps it wouldn’t worry Gertie so much if she did-n’t know he were coming, but one of the boys came up hill intime to see me go & ask aloud where I was going.  Gertie guess & begged of mother not to call the Dr. & she would take

[Thurs. Apr. 4. 1912] Page 16. most anything. so ma called me & said not. so I didn’t . ma has given a few doses of golden ointment & tonight she is coughing less & looking better but is ever so week.  Nellie & I have been sewing alittle on her dress again today but my nerves are all jumping about like lunatics & I’m ashamed of myself  I’ve been so impatient although we have both laughed about it Knowing I didn’t mean to be so.  Oh my Dear tired parents. 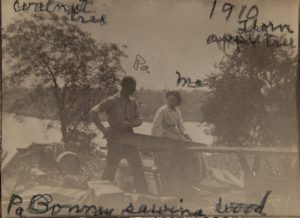 [Fri. Apr. 5. 1912] Fri.5. Just a month ago today I came home, and am glad to say I’m ever so much stronger today than on that day, & it’s been just beautiful out of doors today the birds all singing for joy and the frogs all croaking in one big chorus untill it’s almost deafening as one stops to listen.  The wind has blown stiff from the south making it tedious for one to walk, the crow have sailed about calling so loud that the pariots have been dreadfully un-easy flapping their wings & calling

[Fri. Apr. 5. 1912]Page 17:  most all day.  We has all had our turn ironing today will finish it tomorrow I received a card from Audrey & one from pa they are both tired out  pa can’t leave george for he’s so hunger he might help himself. poor fellow he told pa yesterday he’d give his check for one of ma’s, pies or some of her chicken with biscuitt & gravey. & an Easter card from Alice Cothier  telling Edwin is still in Chicago but is coming home soon, & that she is looking forward to wearing her Easter bonnet Sun.  I have crocheted quite a little on Audrey pillow top today.  Well it’s 9-30 and I have still to write a letter to pa, Audrey & Geo.  Gertie sat up a little while today & so did Ruby yesterday & today.  Ma received a card from Cora Bracey saying they were all getting better & that the Dr. has given all hope for Charlie Parkers baby. poor little thing.  Aunt Delia sent Gertie a post card saying she had made maple sugar three times this spring & that she isn’t very well.  I’ve written my letter & Now I’m going to bed.

[Sat. Apr. 6. 1912] Page 18:Sat.6.  Still the wind blows a gale.  I’ve been doing some mending today on my clothes, haven’t been able to be on my feet much & so, have sewed, croched & read. it’s worrying me to death because I can’t work and I must see ma working so hard, Oh sometimes when tired out I’ve said I be happy if I didn’t have to work.  This is the first time I’ve been strickly forbidden to work as hard or as much as I pleased, but, Oh.  I’ve got to look like sunshine & be as pleasent as though the flesh & all were well  I used to endure five years ago but thats a long time ago.  Received a card from pa.  We sent him some cloth by mail said he’d look after them, George is gaining slow he(pa) & Audrey are well but tired.  Gertie is gaining but its very very slow poor child.  The boys launched the wiynyah today & she ready to run Boys dreadfully tired to night.

[Mon. Apr. 8. 1912] Mon.8.  No word from pa or Audrey today so we don’t know how Geo. is.  Gertie is gaining slow & Ruby can walk about once more.  ma washed & I did the house work crocheted a little on my square. ma received a letter from Mrs. Pardee. who is the Isle of Pines.W.I.  Well I printed two doz pictyures tonight but spoiled six or eight, its 11-15 by the clock & I’m still sitting up, to keep Nellie company, she stayed home Fri. it rained so hard & now must make up back lessons, so guess I’ll write a few lines to pa  he will want to hear from Gertie.  We had our first fresh fish “perch” for supper. 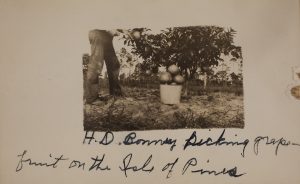 1913 “H.D. Bonney picking grape-fruit on the Isle of Pines” in Cuba.Ma and Pa Martha and Harvey and Elinor’s sister Gertie often went to Isle of Pines (Cuba)  in the winter, found a place to stay and did work picking/farming Labeled by Nellie Belle Bonney

[Fri. Apr. 12. 1912] Fri.12.  We have been having Apr. showers today & it’s little colder tonight.  sweep my room & put it to order, washed the chairs & wood work took a walk through the woods.  Gertie received a card from pa wishing her well & saying they were gaining, ma moped the dining room & done the house work, boys been working for Mat Kennedy on the rivers & lake.  Nellie is studying & I’m ever so tired, wish we were in bed.  Poor dear ma & Pa no one knows how I love them

[Sat. Apr. 13. 1912] Page 21:  Sat.13.  Been sewing & crocheting & doing little odd bits of work.  Doctor Smith came this after noon.  I had him examine Gertie, poor girl her case looks doutful.  Well the stitching is all done on Nellie’s dress.  Will sew hooks & eyes & buttons on Mon.  Pa came home today. Geo. is able to sit up every day poor children, wish they were home,. don’t know what they are going to do, they are have bad luck.  Frank was home today  Ruby is quite well again & it’s getting nice out of doors.

[Sun. Apr. 14. 1912] Sun.14.  It’s fine out today only the wind blows so. Pa, Elbert & Fred all went to the woods & brought home pretty bouquets of hepatiticas our first spring flowers,  I have sent a bon bon box, full, by Fred to mail, to Audrey & Geo. to-night.  They will be glad when they get them in the morning.  I had the tooth ach all night and until 3am, then slept till 9am & still it has been such a long day.  I think Gertie seems a little better today.