[Apparently Audrey’s Carlisle mother in law and her son, “E”  (Elinor often shortens names to the first initial) have come for a visit to Audrey’s but spends time at the Black River homestead.  It is the first we have heard of this part of the family. Later George’s father comes to look for them but they have gone.   Elinor doesn’t seem to pleased about her being at the Black River homestead.  When the visit ends, Audrey and George “are more than glad” and Elinor’s mother gives them a gift bird, “Billy.”  Audrey eventually marries John Maurer in 1928, 15 years later, and her occupation is listed as factory worker which is borne out in the diary descriptions.  Elinor is still baking, sewing gifts and giving gifts, including a cake for her sister Audrey,  “little gold blue enameled bluebird to pin there bibs with.” and an Apron for Gertie and a “white emboierdery dress for Bessie”  She is still living at home but participates in the homestead flower planting “most all day”  It has not been clear if she gets anything back for doing all the chores and making gifts.  She feels somewhat put upon “I’ve been on the jump all day doing every thing for most every body.”  Much of the family lived in or near Wellington, Ohio, including Elinor’s paternal great uncle, Harvey Luther Bonney (1844-1911) and his wife Cornelia (Elinor calls her Aunt Cornelia) and only child Leonard Warden Bonney (1884-1928).  During this month Aunt Cornelia and Leonard drive to the Black River in “Len’s 60 horse power Car” and give Elinor a ride.  Apparently he 21 mile trip from Wellington to Lorain took 2 hours using a 60 horse power car on the straight north route 58.  Her sister’s Nellie and Audrey (with Martha in tow) visit Oberlin & Wellington “for a weeks visit” suggesting that travel might have been somewhat tedious, enough to stay for a week to justify or recover from the trip.  Oberlin is 12 miles direct south on Rt. 58.  See below for a picture Nellie and Martha 2-3 years later.   Aunt Edie lives in Oberlin and Aunt Cornelia lives in Wellington.

Elinor’s diary starts by describing a hospitalization (without clear diagnosis) and long recovery.  She complains of general fatigue throughout the diary but in June she has what she calls “a fit sometime in the night” that occurred after a week of sickness. These recur throughout the diary in various forms.  ]

[Sun. Je. 1. 1913]  Sun.June.1.Oh dear it stays so cold it mostly cloudy & rainy & we  nearly freeze then comes so warm we allmost bake & the flowers look as though it were March instead of June 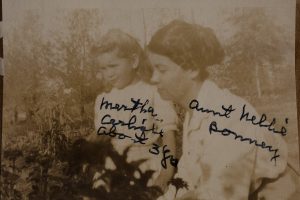 [Sat. Je. 28. 1913] Sat. 28. Well I did the wash & washed my [??]  hair pet. ironed, scrubed, sewed, have been sick all the week  had a fit some time in the night  Mon.night so its been rather hard to work & its so hot one has to wipe sweat most of the time  ma has been feeling so bad,  I have had to work other wise I beieve I should have taken a rest this week.  Audrey, Nellie & Martha have gone to Oberlin & Wellington for a weeks visit, George went to Ashtabula